Blame it on the boogie

Nicola, my middle child, is now 8 years old. Of my 3 beautiful children she is the easiest to get along with. She'll go with the flow far more often than her older sister or younger brother. 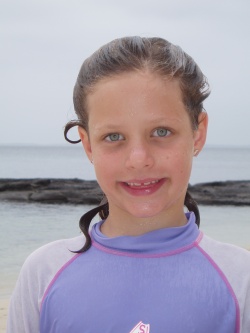 Last month we had a clash of personalities.

Being a dad is a pretty tough job at the best of times. In fact it's that hard, I can't recall one woman I know ever becoming a father.

We were on our summer holidays and went to Fingal Beach for a swim. The girls took their boogie boards into the water.

The waves were ideal for kids learning to catch waves. Nice, small breaks flowing in at regular intervals with no dumpers.

Nicola was reluctant to catch any waves. She was scared of going in to the surf, which is understandable. She has been in and out of the surf for years, but is going through a phase at the moment where she has lost her confidence in the water.

I went in with her and held her hand. There were kids half her age in the water with us. She made up her mind very quickly she didn't want to stay in the surf. The water was no deeper than my waist level, her shoulders.

"Dad, you can't force me to stay in the surf. I want to get out, she yelled. I'm scared that I will get dumped. Dad, please take me out of the surf now!"

I didn't want her to get upset, but that was too late. I didn't need a big argument. We get to do enough arguing when we are at home.

It was the classic coaching dilemma.

If I push too hard now and make her stay in against her will, potentially she'll hate her boogie board, the surf and her father for a very long time.

If I don't encourage her a little bit she'll miss a golden opportunity to improve her skills and confidence in the surf.

Some of the questions I had to quickly answer included:

Yes, she's only just turned 8, but she already has a clear understanding of what she likes (olives, dancing and doing cart wheels) and what she doesn't like (bananas on her cereal, being bossed around by her dad and her older sister annoying her).

Two days later we went back to Fingal Beach. I couldn't get Nicola off her boogie board. It's hard to know what had changed in 2 days.

I had mentioned to her that I was disappointed she didn't stay in the surf for longer on the first day. She then asked me; “Dad, what do you mean by disappointed”?

Her mum and I had both told her that she had nothing to fear and was a confident and capable swimmer in small waves.

I think she had made up her own mind, in her own time that it was worth having a go.

All I had to do was return to Fingal Beach and hope the surf conditions we're similar to a few days ago. Luckily they were even better.

Seeing the smile on her pretty little dial as she coasted in on the waves put a lump in my throat.

I've found as the kids grow up they do things when they are ready to do them, not when we want them to do them.

Push too hard and they'll give up as soon as they can. Don't push enough and they could end up being good at nothing and having very few interests.

Coaching your staff is so much about trust, timing and providing them with the right environment and opportunities to excel. If you can get the balance right they can really surprise you.

The best coaches I've worked with seem to know when and how to have the right conversations.

When to push, when to guide and when to get out of the way.

As her father, I hope that Nicola grows up to associate the surf with great memories and having fun.

At this stage all that I can do is keep encouraging her to have a go. Take her down to the beach with her board and get in the water with her and provide her with any support she needs.

When the people in your team are ready to embrace a new skill, they'll be ready. Not before and usually not when you want them to be.

Be patient, create the right environment and opportunities and accept that everyone will process things at different speeds and in different ways.