A few weeks ago I found myself out on the streets in Sydney selling The Big Issue Magazine. I only spent 1 hour selling. It was one of the toughest hours of work I’ve done for a long time. As a friend of mine said, - “If you ever want to feel invisible, pop on a red Big Issue hat and a luminous vest”. 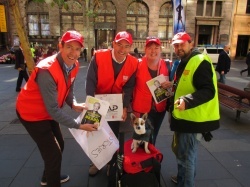 After the hour of selling I reflected on what I believe you need to succeed in sales:

Here are 5 things I think any sales professional needs:

After my one hour of selling The Big Issue I was knackered. I had picked up some of the best sales training I’ll ever receive. You can read all the books, attend all the courses and watch all the You Tube clips on how to sell. For me, nothing was more useful than getting out on the streets, for a great cause and working hard to engage people and trying to turn lookers into buyers.

When I reflect back on that hour on the street, I had learnt that as the famous saying goes, “You can’t sell a secret”.

I had to keep going, smiling and nodding my head. I couldn’t allow myself to take any knock back’s personally. My instinct kept telling me; hang in there, I might be about to get lucky.