There is something wrong with my thick shake

Last month I found myself at McDonalds on Collins Street in Melbourne pointing to my thick shake and telling Emma, the 14 year old girl behind the counter; 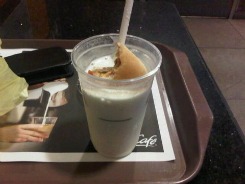 “There is something wrong with my thick shake”.

Despite feeling like an idiot, I followed through with the activity.

The reaction of Emma at McDonalds was as you would have probably already predicted.

Emma stared in disbelief at the shake (with half a burger in it) and then called her manager, Bill.

“Bill, come and look at this!”

Bill came over and looked at the shake. Then he looked at me. I pointed to my thick shake and said:

“There is something wrong with my thick shake".

He took a closer look, threw it in the bin and casually moved over to the thick shake machine and poured me another one. He then placed the new shake on the counter, looked at me and said;

4 things I took away from this experiment:

As a leader of sales people you know the importance of empowering your staff.

Every day your road warriors are faced with any number of issues that will require them to use their judgement and think on their feet.

McDonalds knows a lot about training people properly to follow a system.

I don’t think you can treat your best sales people like McDonalds staff.  Business to Business sales isn’t as simple as working at the big M. Your people need to be equipped with the tools and the skills to weigh up every situation and use their experience to make the right call under pressure. That’s what great sales people do, every day.

If you train them to work like 12 year olds, what type of sales people will you attract?

Yes, of course you need rules, policies and procedures for sales people. I’ve just noticed that if you pull the reigns in too tight they either check out physically or move out.

If someone came into my café and said to one of my staff there was something wrong with his thick shake and he had half a burger stuffed into it I’d expect them to say something like:

Possibly not great customer service, but would I really want customers like that in my café?

Thanks to Seth Godin, who gave me the idea for this experiment when reading his book Linchpin last year.